A Card & Cat and Mouse

Hello! How are you?

I haven't been very crafty lately but with good reason... It's been too bloomin' hot!! Jeez I haven't slept in ages and my brain is fried.
I know it's nowhere near as hot as some of you are experiencing, but we are just not equipped to deal with it. We don't have A/C... I would LOVE it but it seems we have to put holes in the walls for outlets and hubby says no! The heat doesn't affect him so I suffer, but not in silence haha!

Today, thankfully,  it has cooled considerably and it's comfortable so I finally made a card. You remember the card I made with the alcohol lifting technique? (here)... Well, in a video by the very clever Jennifer McGuire, she shared how you could stamp your 'lifted alcohol ink' onto cardstock and I did just that.... It didn't turn out too bad for a first attempt 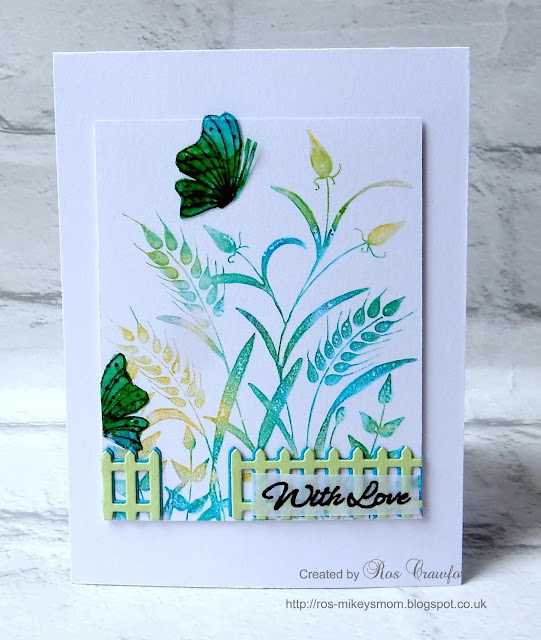 It gives such a pretty subtle colour. The butterflies I added to this were stamped on a scrap of AI on acetate and then fussy cut. 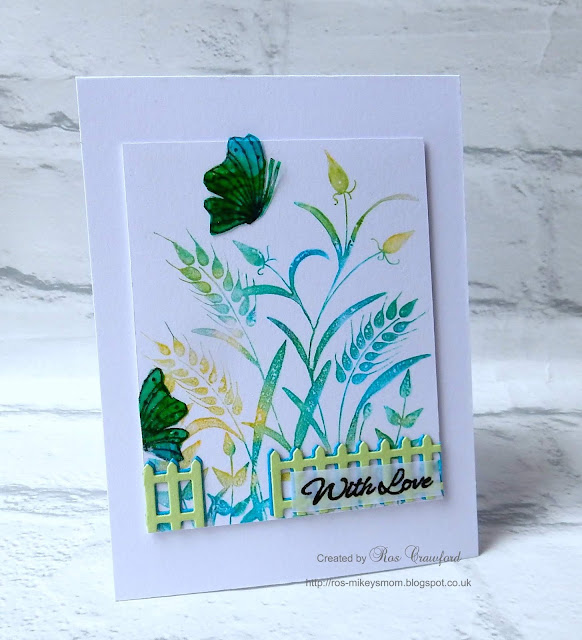 I used one piece of 5x7 Yupo and so far I've made 3 cards from it and still have a little left to make another so that's not bad.

As it's been so hot, we leave a door open to catch the breeze and allow the cats in and out - First thing Saturday morning DH and I were getting ready to go visit Stuart (DH's eldest) in Derbyshire when this little lady brought in very large mouse... 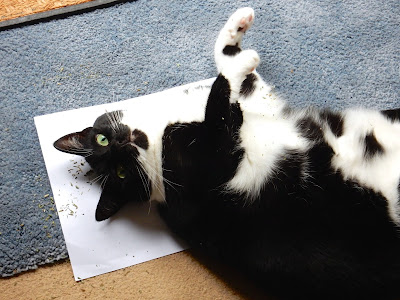 So proud of herself, she was just about halfway up the stairs when it squealed and I saw her...Of course I squealed and yelled (loudly) which caused Missy to dropped it and it ran down the stairs. I don't particularly like them but I hate to see them hurt and I'm not good at picking them up either. Thankfully Mikey rescued it and checked it over but it died ... from shock I guess.  Oh and just so you know... Hubby shut himself in the bedroom till it was all over, said he didn't hear me ... Yeh right! He's my hero Lol!

Have a fun day and take care... Thanks for popping by

Hello, how are you?

It's been a warm and sunny week here with a little rain thrown in. I haven't made any cards this week but I have done some sewing (made a couple of tops) been for lunch with my GF's, and right now we are waiting to hear from hubby's son as his wife is having their second baby boy this morning.

I do have a card to share though, one I made a couple of weeks ago which will posted today with a few little gifts for a friend's birthday 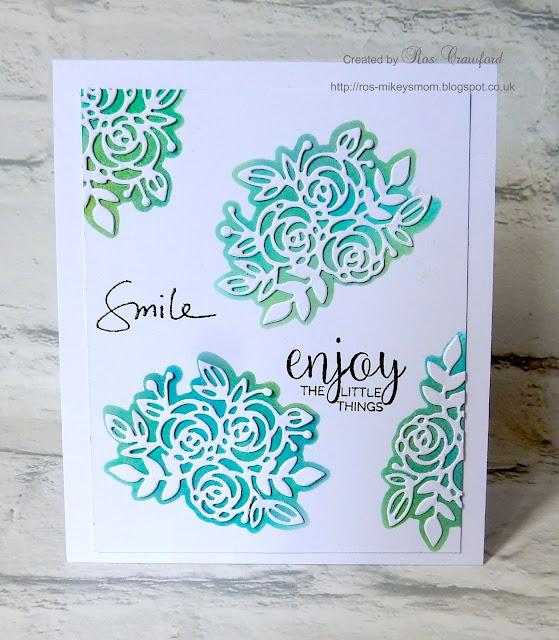 I bought this shadow die from Aliexpress months ago and honestly thought it was going to be a bit bigger than it was. Unsure of what to do with it, I kind of just left it.
Anyway I came across it again and this time I had a spark of inspiration... Why not use the shadow die as a stencil? So that's what I did. 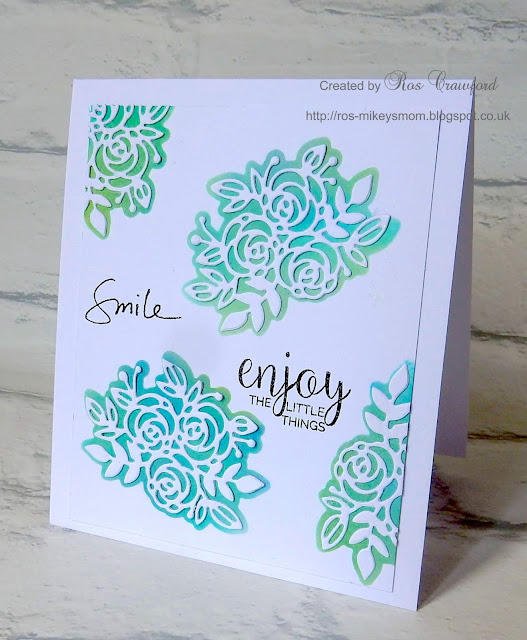 The colours happen to be not just my favourites (as you can tell by now) but also my friends, so after ink blending it was simple to just put the die cut on top. 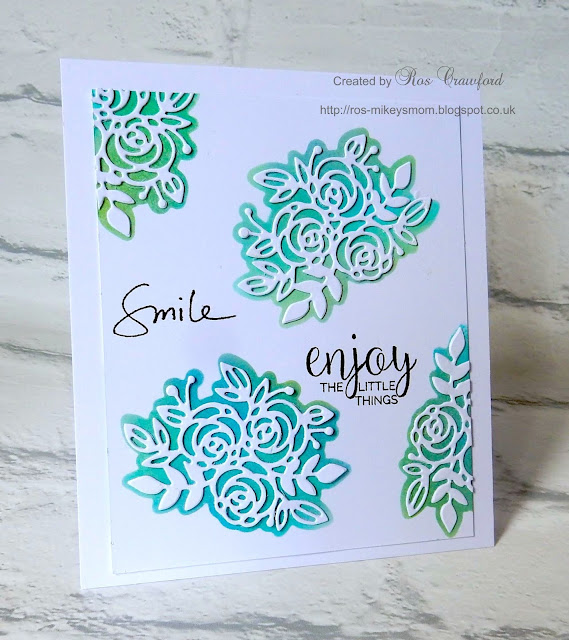 A little stamping and embossing and that was it.

I'm still having treatment on my neck and shoulder and it seems to be helping... It's all part of the problem I had with my spine... Prior to the operation the right side of my body was supporting me so I have to re-align the left side and build up the strength again. It's all good and I'm be eternally grateful to have my life back.

Have yourselves a wonderful day... I'm off to visit your blogs now

Hi there...
The other half? No, I'm not talking about my husband Lol!
I am referring to the other half of the alcohol ink background I did for my previous card and used for today's card. 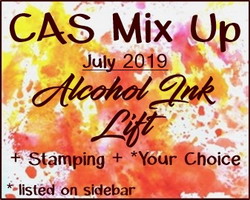 ...Confused me a little this month. Anyway, this time I used the Alcohol Lift ink pad. It's the first time I think I've used it too, though I bought it ages ago... One of those things you need and by time it arrives your interest has moved on... 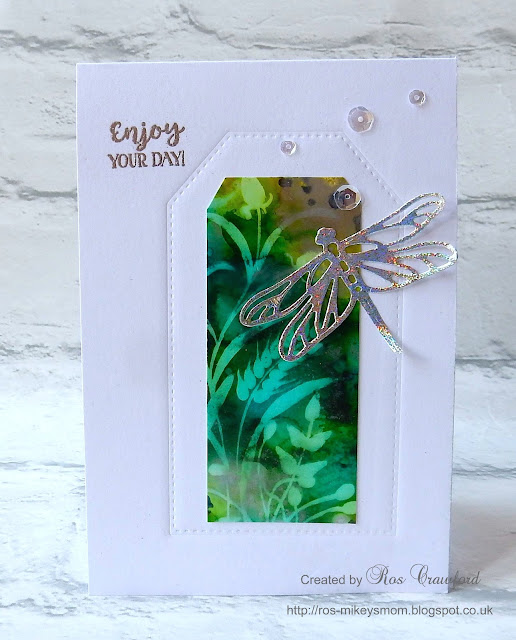 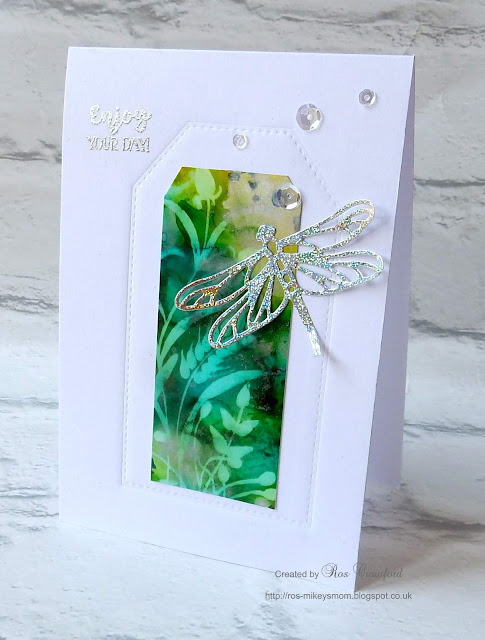 I stamped the sentiment with Versamark and embossed it in silver, added a die cut dragon fly and a few sequins. 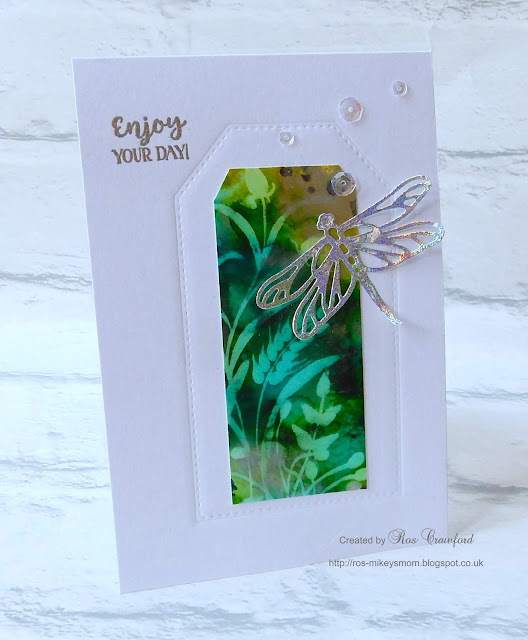 The dragon fly is cut from a holographic piece of card but I peeled off the backing to give it a more delicate look and obligingly it curled the tail for me.

I hope you have a great weekend... Friday seems to come around awfully quickly, funny it was never that way when I was a working girl... 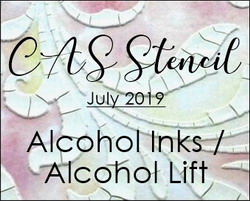 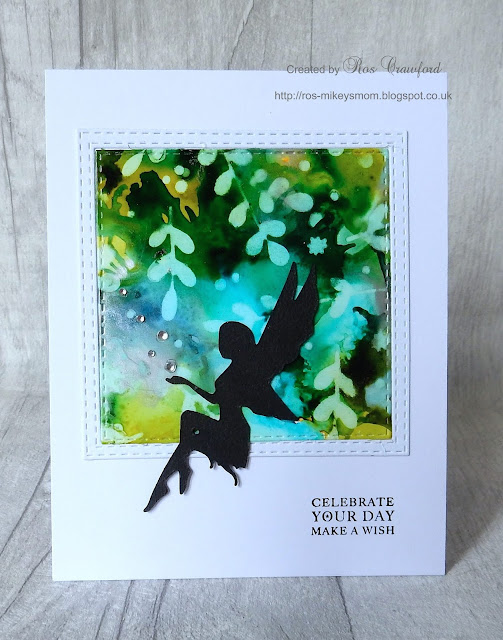 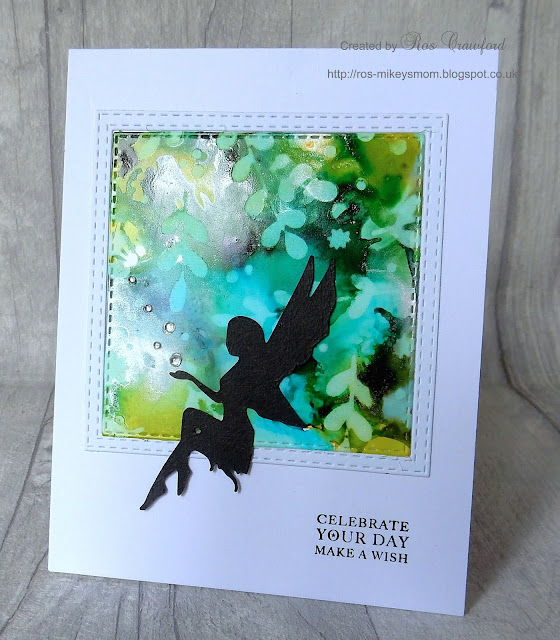 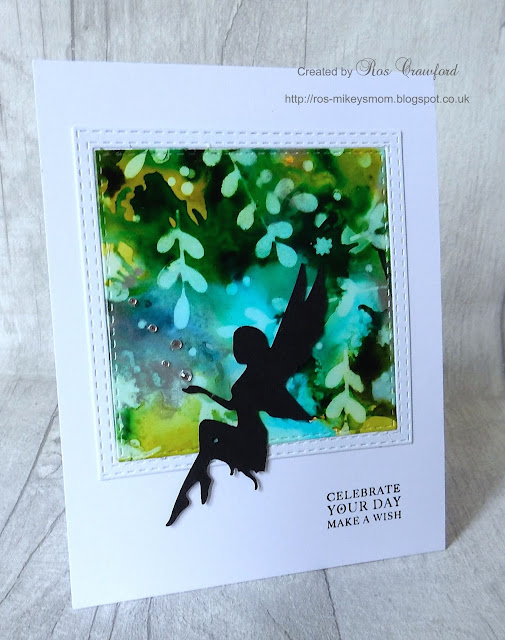 Happy Sunday peoples...
I hope you are well and I sincerely hope my friends in California are safe following the earthquakes... 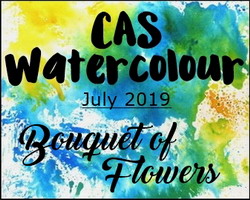 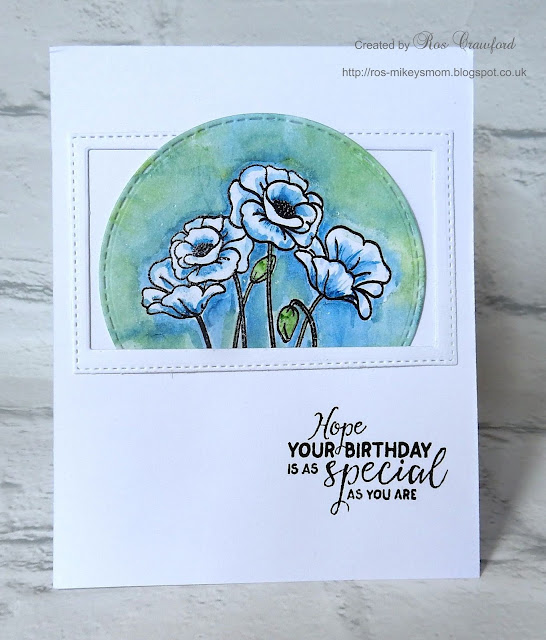 I stamped and embossed an old but favourite stamp of mine by Clearly Besotted onto ordinary cardstock... I use card I get from Ebay, it's quite heavy and a nice bright white and I've been using this for years. 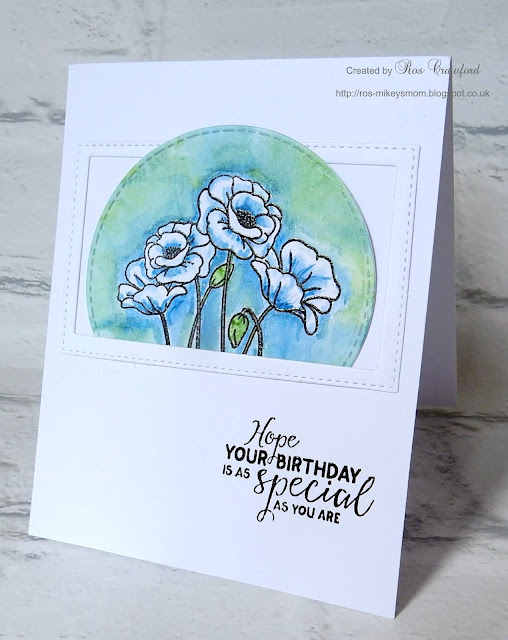 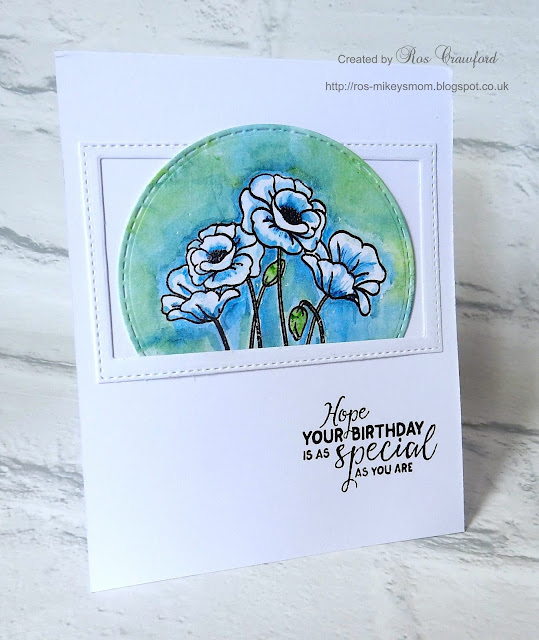 Before I finish I ought to clarify what I mentioned in my last post re the Apple Store... I realise that I confused some of you when I said raided... It was raided by a mob of thieves who managed to make off with some 36 iPhones and a Laptop all at 9.45 in the morning.

Okay that's me for today ... Have a good one

Hello there...
I hope all my friends over in the USA enjoyed your 4th July celebrations... Now it's almost the weekend.

It's been another busy week in our household, one that included a trip to the Apple store in Liverpool One. I rarely go into the city but DH's iPad was dying so we made an appointment and off we went. What a beautiful day it turned out to be... The sun was shining and honestly you could have been in any city in the world... Sitting out taking coffee and in beautiful surroundings. For those of you who don't know what Liverpool One is... It's a redeveloped area of the city close to the river that has all the fancy designer shops as well as restaurants, coffee shops, book shops, a cinema and much more.
I said it had been awhile since we were there and the Apple store had moved into a larger premises... Very modern and full of people but we were looked after and came out with a new iPad for DH.
That was wednesday, so imagine my shock when I saw that yesterday (Thursday)  the store was raided whilst all the shoppers were there. Yikes!

I have another card to share using a stencil... I've a passion for them lately, and this is for a blog friend who moved house ... a little late but it will still be a surprise I think. 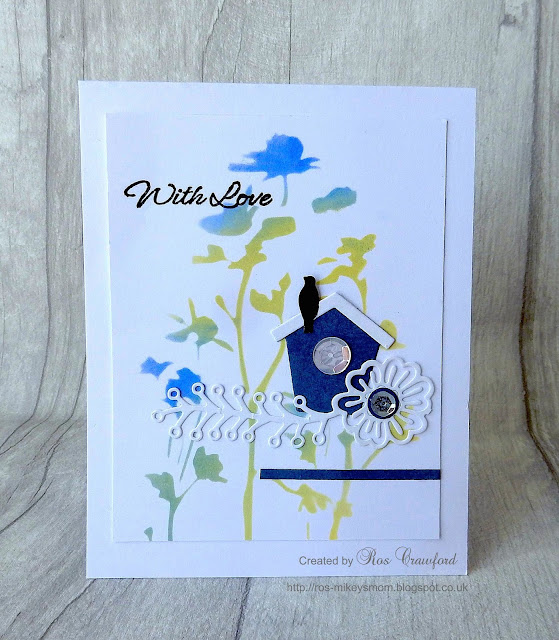 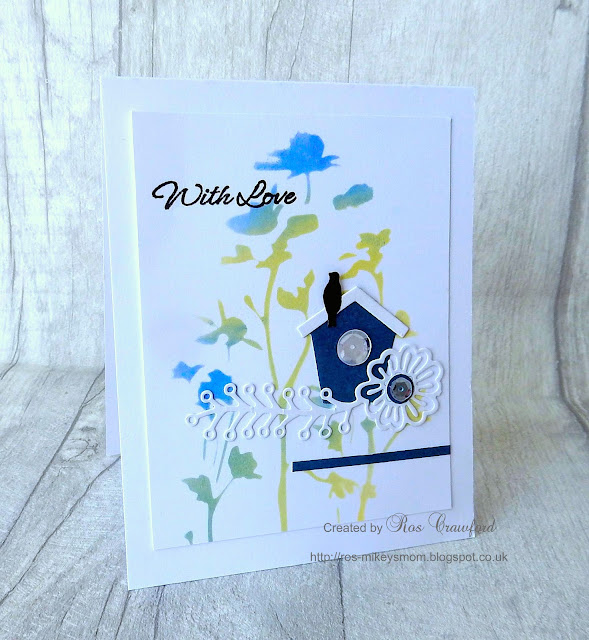 I also have to mention my visit to the dentist... It was amazing! My filling was fixed in 20 minutes with no needles no drilling AND the dentist I saw was a young (very) handsome Spanish guy... Total cost £22...What's not to like? Lol!
If only it could be like that all the time.

Have yourselves a wonderful day... I hope the sun is shining where you are, it certainly is here...

Till soon, be safe

Hello and welcome to July! I hope your week has started well?

Saturday was a scorcher here in the UK so we decided to drive over to Salford Quays to the indoor shopping mall. Hubby wanted to go to Marks & Spencer outlet. Outside the mall was a wonderful Artisan market, heaving with people, but it was just too hot for me so I didn't get to see much at all before I dived back into the cool of the mall...
The heat didn't last, now we are back to cool weather and it's very, very windy.

I have another stencilled card to share with you today... Just a simple one for a friend's birthday 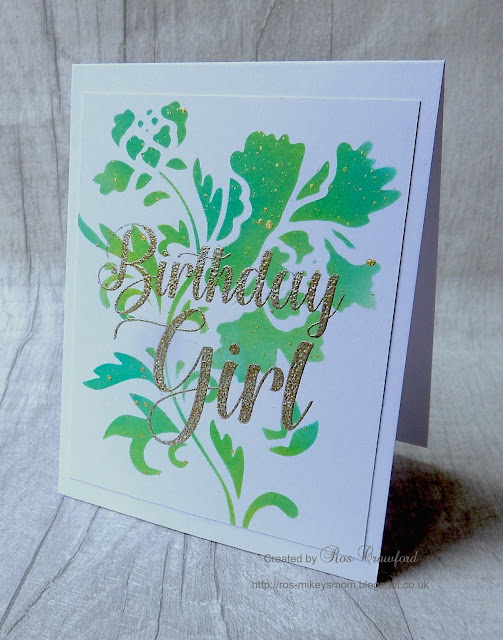 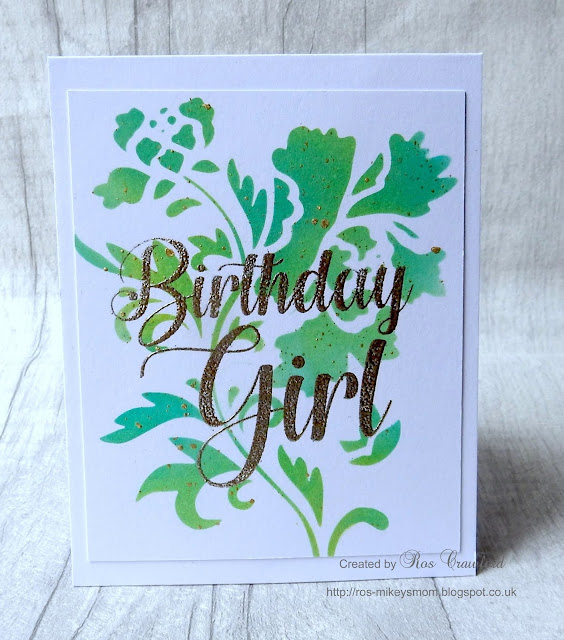 My shoulder is still bothering me and I have another treatment this week as well as a dentist appointment... You all know how much I detest going to the dentist... can't wait to get that over with I can tell you.

Have a beautiful day and I hope to catch up with you very soon...