Hello there... Did you think I'd fallen off the planet?
I know it's been awhile and I do hope you are all well and safe... Thank you for your comments and for letting me know what you've been doing in isolation.

I still haven't had the inclination to craft. However I needed a birthday card for my husband's DIL so I had to make something. In the end after much trial and error I went back to my comfort zone - The technique I love and the colours I love 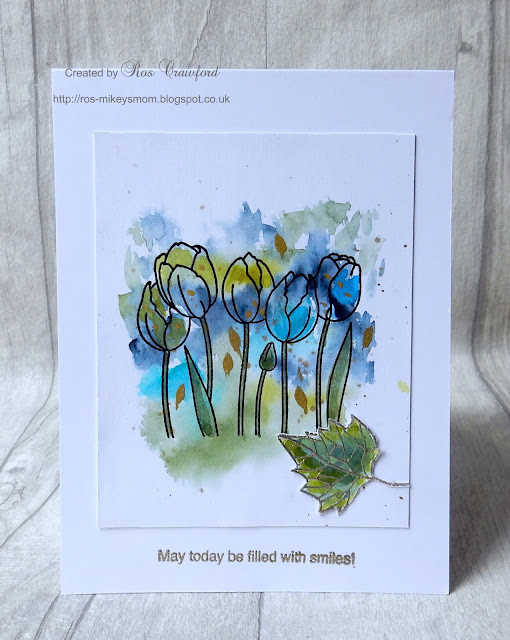 The tulip stamp is by Clearly Besotted and I've used this many times but not over watercolour before.
It's simple and it's me 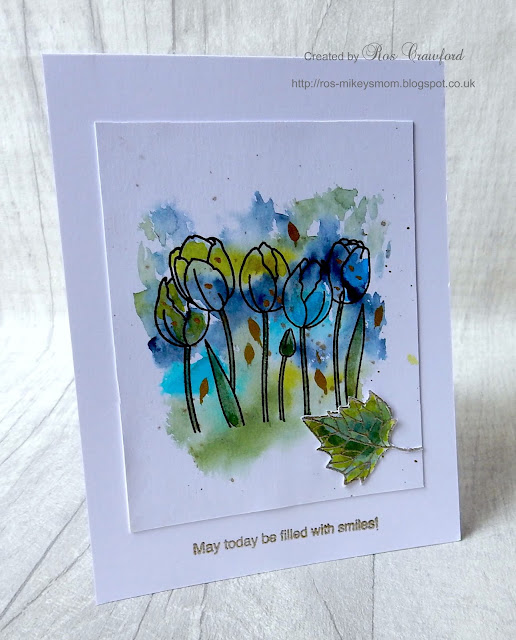 It's been a weird week here, not just because of our great British summer of constant rain, but I had the need to call an ambulance this week for DH... 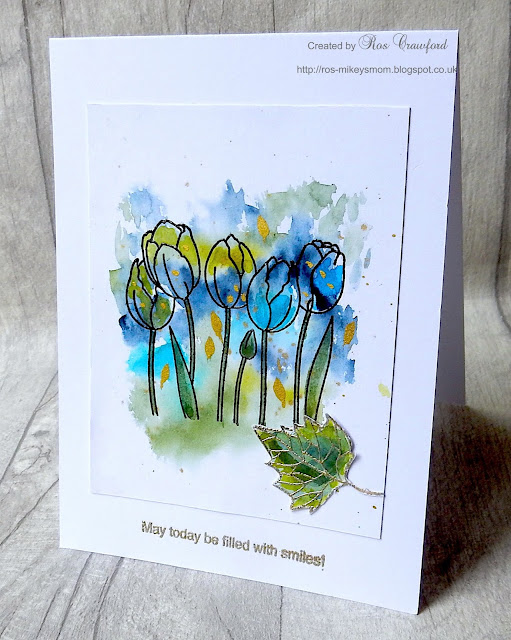 He wasn't feeling to well and collapsed in the bathroom, which he'd locked. I got into him using a screwdriver and managed to call the emergency services. Though they were pretty quick, by time they arrived he was almost fully alert and sitting in a chair but nevertheless, they wanted to check him out at hospital. He wasn't too keen on that but finally agreed to go. Thankfully all the tests were clear and he was released later in the day with a follow-up booked with the GP.

As it happened I also had an appointment with the practice nurse following up on blood tests... My sugar levels were quite high last time and I was expecting the worse despite my efforts in lockdown. Well I was pleasantly surprised when she offered me a gold star HA! Not only have I lost a stone in weight but I have reduce my sugar levels by 5 points, 5 POINTS!! See, there's always a silver lining.

Okay... I'd better say bye bye for now and hopefully I will get to visit you all soon

Take care and be safe

So happy to see your post this morning. I was going to send off an email today to see how you are, I'm glad you are doing well, and good news on the weight loss and sugar level! That's awesome! Sorry to hear about hubby- (what a scare), but glad he is okay! You know I love your card, gorgeous colours and wonderful design! The sentiment is perfect! Take care Ros, be safe, hugs,

Oh how frightened you must have been while you were unscrewing the door! Glad he seems okay. And well done for bucking the trend when it comes to lockdown weight - most people seem to have put it on.

Yes, this card is very YOU but that's a good thing I think. The tulips simply stamped over the watercolour look beautiful.

Beautiful card with your lovely watercolor background! Yikes, so sorry to hear you had to go thru that but glad your hubby is okay! Good for you for losing weight during the covid and to keep your levels low, I think sometimes all I do is cook and eat and when one meal is done I am thinking of the next one lol!! Not much crafting for me at all for me except what has been pre-scheduled thru sept. I do miss it, but I have been doing LOTS of crafty shopping lol, it's as fun as creating I find..hah! Take care my friend!!

Sorry to hear you had a fright with your DH but glad that the checks found nothing and congrats on losing all that weight and reducing your sugar levels. You certainly did well to do that in lockdown as I think hubby and I have treated ourselves to a few more sweet treats than normal, though luckily I am not a baker..lol. I love your beautiful tulips over that wonderful watercolour background which suits it perfectly, and the embossed leaf is so pretty too. x

Sounds like you've had quite the week Ros! Glad to hear DH is doing ok and YAY to you for the weight loss and 5 point sugar drop...think I've gained everything you lost! Grrr!! Your card is absolutely beautiful and yes, very YOU!! Just stick with what you love doing best...it's always perfect! Hope this week goes a little more calmly for you and you get some sunshine!! Hugs. :0)

Oh a lovely card Ros.. your colours and yes style. Hope hubby is ok and you yourself - good Dr report, well done.... I think I'm putting on the weight and we've had my hubby in for Prostate checks and biopsy yesterday.. get the results Friday - he's not stressing just wait till the results are in and then make plans. sighhh - just getting older hey!! Hugs Robyn

I Card Everyone said...

Ros, I adore tulips in every shade! Your way of water coloring them [and the chosen colors] ticks all my boxes!
Happy to hear you've been a good patient - I think I've found the stone you've lost! lol Doubly glad your DH is okay!
=]

Fabulous card, great colours and design and yes it's very you Ros x. Sorry to hear about DH and so very glad he is OK. Well done you on the weight loss and your sugar levels x. The weather has been wet, cold and windy up our way....Summer in Scotland! x Sending hugs x.

Oh my...a scary time for you Ros...thankful you had a screwdriver handy!!! Also thankful all is well for both you and your hubby....and that you posted a lovely card - it always makes my day a bit better!!!
Paper Hugs,
Jan

So happy to hear all turned out well for you and your DH, Ros. So did you give him a bit of advice..."not necessary to lock the bathroom door when it is only you and me in the house"! Scary...and you did the right thing to call the ambulance. What a relief to have his tests normal and yours too:-)

A gorgeous birthday card, Ros! Water color painting is your art style for sure! You did it so well! Sorry to hear about your husband not feeling well. I hope he is doing much better now. And, congrats to your for getting your sugar levels down! I'm not looking forward to seeing what my cholesterol level is since being on these corona virus restrictions. We got a welcome shower yesterday afternoon for it's been very dry here. I sent a card out to you several weeks ago. I surely hope that it arrived and didn't get lost in the mail. Anyways, take care and have a good rest of the week, hugs!!

Beautiful tulips, Ros, and the background is awesome! Love the gold embossing that gives it an elegant feel! Good going on your sugar levels! You must be doing something right!

I'm so glad everything is OK with your husband,and great that you've dropped your sugar level :) stay fit and healthy.
Great card, love the splashes of colour.

Fantastic technique and gorgeous colours!
I have been doing nothing but crafting, cleaning & cooking! I hope you are staying well! We are back in lockdown here and things are not getting better, so I just distract myself with cardmaking:)

Happy to hear that your DH is OK after the shock of him passing out. Glad that he agreed to go to the hospital and get checked over. Gives him and you peace of mind. Congrats on your sugar levels. Down 5 points is AWESOME! My numbers have been so back during Covid. Not moving as much and too much time on my hands at home so eating too much as well. xx

But why did he pass out, Ros? Geez, what a scare, especially being locked out, and then not to know why it happened would make me nuttier than I am. On the other hand, well done you with the weight loss and huge drop in your sugar numbers!! You stand alone during this darn pandemic which has most of us eating our own weight in sweets every day!

Hopefully, the next thing that happens is your mojo comes roaring back. I've missed you. Today's card is a reminder of how much I enjoy seeing your stunning watercolor cards! Take care ~ and Ian, too! Hugs, Darnell

Ros, I'm so glad to hear your DH was released on the same day and all right. It must have been a scary moment while you were trying to open the locked door with a screwdriver. Great news that your blood test results improved!
Your tulip card is fantastic! Love the mix of the beautiful mature colors with gold here and there!
Hideko xx

Ros, I've been away camping and off the computer, so didn't notice your absence, but I'm sure glad you and DH are both okay. You sound exceptionally well, in fact! Scary incident with your DH. Same thing happened with my Rich a couple of summers ago, but turned out he was dehydrated. He collapsed in the yard. I'm wondering if you found out why your hubby collapsed. Your card is super pretty with the beautiful watercolor wash. I'm all for staying in your comfort zone when you're feeling a little out of sorts. Hugs!

The tulips over the watercoloring is wonderful, Ros! Love the bits of gold & perfect BD sentiment! How scary to have hubby collapse! Glad they didn't find anything wrong, but good he will follow up. Hurrah for the lower sugar & wt loss! I'm afraid to see my doc or get on the scales at home! Walking Fritz is obviously not enough exercise or I have to stop eating what I like--haha! Been lecturing myself--now to listen to what I'm saying! At least crafting is therapeutic for me, but I don't think I'll ever catch up on blog reading. Struggling to be on the computer, but I often think of you & wish we could just have a cup of tea together!

Oh my, what excitement you would certainly rather have passsed on with your DH. Good to know he's doing fine again... the card certainly is a true Ros - and gorgeous!